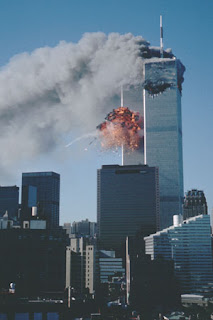 It was a bright sunny Tuesday morning, I had taken the week off from work because we were bringing the newborn SugarPlum home for the first time. My wife had gone into the office in downtown Atlanta to grab a few things and then were going to get our daughter at noon.

plezWorld saw something on the television about about a plane flying into the World Trade Center in NYC and decided to turn to CNN and see what was going on.  I turned on the TV just in time to see the second plane slam into the tower... in disbelief!  The imagery of the moment, no, that entire day will forever be etched in my memory.


The most joyous day of my life - bringing home my baby girl - merged with the most horrific day in US history. I remember holding her in my arms that afternoon and into the night wondering what had become of the world, when someone would plot and plan such a diabolical attack. And I remember fighting back the tears while thinking of what a hateful world we had brought my daughter into... I could only pray she would be capable of growing up devoid of the cynicism and hate this day brought us.


It is now a decade later, two wars have run their course, we have a Black President, bin Laden is dead... and my innocent little girl is a pre-teen. She is pretty as a button, lovable, and kind. But we have raised her in a changed world, where every motive is suspect, our freedoms have been abridged, our economy has tanked, and political vitriol has damn near crippled President Obama. This post-9/11 world is vastly different than the one I grew up in. I can only hope we can use this tenth anniversary of 9/11 to put this behind us and move on to a kinder, more understanding America.
Posted by plez... at 2:50 PM 5 comments: