OK... the title may be alittle misleading. It's not that serious - well, it is serious to me. I have updated my blog with some new content and links. Since I started this thing a few weeks ago, it has been very difficult to go very long without finding something new and interesting to add. It's funny because I think I've removed as many things as I've added. With that in mind, I'm also drawing alot closer to realizing what the focus will be for this particular blog.

I started this blog because I had to register with Blogger.com to add a comment to a friend's site... and as the old saying goes: The rest is history! I was thinking that I would occasionally chime in on things going on in my life. Well, since my life is kind of boring (and I don't want to put my business out there like that), I decided I would talk politics. Well, blasting the current Administration gets old and frankly, I'm not inclined to look under ever rock on the Internet trying to find some vast conspiracy with The Man; I'll let someone else do that.

I love my music, so you will tend to see a few posts about my music collection and what I like to groove to when I'm in the mood. If you haven't done so already, make sure you view the Funkadelic clip in my "plezLOVESmuzik - Can U Funkadelic" post. It is very dark concert footage and you can barely see Michael Hampton, but that haunting and searing guitar solo in "Maggot Brain" will continue to give you chills for the rest of your life!

Lastly, the purpose of this post was to announce a new feature that I've added. Thanks to the folks at BlogRolling.com , I now have a list of blogs that I am happy to include on my site. It is a blend of amateur and professional writers who have different perspectives on this thing called Life in America. There are Liberal, Moderate, Libertarian, and Conservative views present, so my readers can come to one place and see diametric views on many issues facing America.

As I find sites of interest, I will include them in my BlogRoll... I hope you enjoy!

Something that is definitely on The One! The FUNK gets in your bones, makes you wanna shake. The FUNK rattles yours ears and wiggles in your brain.

I found some old (and classic) video that recalls my youth. I used to frequent the Coliseum in Hampton, Virginia as a teenager to watch groups like The Jacksons, Earth Wind & Fire, The Bar-Kays, The Isley Brothers, The Floaters, Rick James (when Prince was the opening act), Bootsy Collins, and many others. I was mesmerized and taken to another place in the late 1970's. My favorite act (by far) was the conglamoration of Parliament and its grittier incantation - Funkadelic. For a few hours, you were taken to another galaxy... another time ... another feeling ... a far different groove. Was it the buzz from the cloud of cannibus smoke that floated dense and heavy over the Coliseum floor? Was it the flashing lights, blaring horn section, rhythmic drums, and screaming guitars? Was it Star Child flying above the audience with his Bop Gun?

It was the FUNK!

In Rotation - Thursday's Groove (Part I) 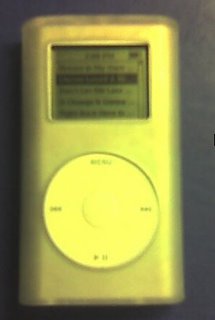 The best thing since sliced bread is the Apple iPod. I won my Mini in a contest at work last year and I've been hooked ever since. I gave my daughter a Shuffle, and my wife sports a Nano that was a gift from a client. At the office, I'm usually plugged into my laptop listening via iTunes. When I'm on the plane - which I do twice a week - I got the Mini poppin' my eclectic blend of R&B, Soul, Hip Hop, Funk, Old School, Neo-soul, and Prince ... with a sprinkling of Pop.

Things are alittle slow in the office, so I thought I'd get my 'blog on with a taste of what's In Rotation. It's Thursday afternoon, so I must be listening to my "50 Least Played Hits" Playlist to hear songs recently purchased from the (iTunes Music Store) and less heard playlists.

I crunch crushed ice as I sip on a glass of ice water and lemon slices. Here's the music flowing out of my iPod onto the dancefloor of my mind:

Over and Over by Madonna (Extended Re-mix)
She Drives Me Wild by Michael Jackson
Irresistible Bitch by Prince
Gold Digger by Kanye West (Featuring Jamie Foxx)
Heartbreak Hotel by Whitney Houston
Spotlight by Madonna (Extended Re-mix)
You Know That I Love You by Donell Jones
The Glamorous Life by Sheila E. (9 Minute Dance Jam)
Blood On The Dance Floor by Michael Jackson
Tender Lover by Babyface

What If by Ruben Studdard
In the Closet by Michael Jackson
Jumpin' Jack Flash by The Rolling Stones
Hard To Get by Rick James
Mountains by Prince
Hypnotize by The Notorious B.I.G. (Explicit Version)
Distant Lover (Live) by Marvin Gaye (Wet Panties Version)
Satisfaction by Otis Redding
Bustin' Out (On Funk) by Rick James
I Wonder U by Prince

Ghetto Life by Rick James
Free Yourself by Fantasia
Sexy M.F. by Prince & The New Power Generation
I'll Always Love You by Babyface
Love The One You're With by Luther Vandross
So What the Fuss by Stevie Wonder (With Prince on Lead Guitar)
Bambi by Prince
Back In My Arms Again by The Supremes
Truth Is by Fantasia
Thank You (Falettinme Be Mice Elf Agin) by Sly & The Family Stone

The Soundtrack of plezWorld plays on, but I have to go to my Status Meeting.

OK! I've given you people about a week to let the Dick Cheney thing simmer down in the press. Enough of the corny late night jokes, mild protestations from the mainstream media about the secretive White House, and bad makeup jobs on one Harry Whittington for media briefings (that pancake makeup did make him look decades younger, though). I've come to the conclusion that this was the biggest political non-issue of the past decade. We haven't been this worked up since Monica Lewinsky produced that stained blue dress - but that's a whole other post.

So why am I blathering on about a non-issue? Well, it's been a slow news week and there is one component of this whole Birdshot Incident that hasn't been sufficiently explored to my satisfaction. And the one problem I have is about the amount of alcohol that had been consumed prior to that fateful shot. Now Mr. Cheney has said that he had a beer at lunch (and we all know that the shooting took place around dusk). Unless he had a very low tolerance for brew - which I truly doubt - a lunchtime beer wouldn't be that big of an issue. But if you look alittle closer to statements made by Mr. Whittington when he was interviewed, things start to look alittle fishy.

When the sheriff went to interview Mr. Whittington at the hospital the next day, his initial remarks were that there was no alcohol involved. See page 2 of The Smoking Gun's copy of the Kenedy County Sherrif's Department Incident Report (Texas Cops Release Cheney Shooting Report). Combine that with the fact that instead of being interviewed the evening of the event (Friday), Dick Cheney waited until 8:00 AM the following morning to speak with the sheriff about the incident.

Something tells me that Mr. Cheney, Mr. Whittington, and probably the whole hunting party was sloppy drunk when this whole shooting incident went down. I think that they'd been drinking scotch and waters in the backseat of the Veep's caravan since lunch. They staggered out into the field when the scouts found some birds and Mr. Whittington (in a drunken stupor) blithely wandered into Mr. Cheney's line of fire as he tried to blast some quail feathers out of the brush. Don't feel too bad for Mr. Whittington, I don't think he felt any pain!

More power to them... just another case of the coverup of a victimless crime (what crime?). I wish Mr. Whittington a speedy recovery and I'm glad that the tasteless jokes about Dick Cheney have stopped. Hey, what's wrong with alittle birdshot between friends?
Posted by plez... at 12:54 PM No comments:

Yeah, it was just a matter of time before I created my own BLOG. I'm a bit of an early adopter, but I've been a bit reticent about creating such a thing since my last foray into the Internet - the creation of a personal website - nearly consumed ME and all of my free time for a period of 3 years.

I have almost NOTHING to write about, since this thing was created out of the necessity of posting a comment to a friend's BLOG... So here goes...

When inspiration hits him OR when a turn in current events prompts him OR a particular feeling continues to haunt him OR when a incident causes a pause, prompts a belly laugh, or elicits a tear from him ... you can expect to (possibly) read about it here. How's that?

Currently listening to "Adore" by Prince on my iPod as I sign off... until next time.