In May 2008, plezWorld wrote the following after joining the ranks of the unemployed:

I sincerely believe that when one door closes, another door opens.

Today, plezWorld is closing a door on a brief chapter in my life.

I wait with optimism for the door that is about to be flung open.

"Would you trade your funk for what's behind the third door?"
- "Funkentelechy" by Parliament

plez sez: although it was long and arduous, the wait was not without grace.

over the past year, i've checked a lot of doors and met a lot of interesting people. i was also instrumental in launching a new management consulting firm.

as a result of our hard work and optimism, i'm proud to announce that our company has opened the door on an exciting opportunity and the future looks bright.

An official announcement is planned for later this morning, but it appears that President Barack Obama is poised to name the first person of Hispanic descent to the Supreme Court of the United States.

WASHINGTON — President Barack Obama tapped U.S. Circuit Judge Sonia Sotomayor for the Supreme Court on Tuesday, officials said, making her the first Hispanic in history picked to wear the robes of a justice.

If confirmed by the Senate, Sotomayor, 54, would succeed retiring Justice David Souter. Two officials described Obama's decision on condition of anonymity because no formal announcement had been made.

Administration officials say Sotomayor would bring more judicial experience to the Supreme Court than any justice confirmed in the past 70 years.

A formal announcement was expected at midmorning.

Obama had said publicly he wanted a justice who combined intellect and empathy — the ability to understand the troubles of everyday Americans.

Democrats hold a large majority in the Senate, and barring the unexpected, Sotomayor's confirmation should be assured.

If approved, she would join Justice Ruth Bader Ginsburg as the second woman on the current court.

When the retirement of David Souter was announced, Sotomayor's name was floated as a possible nominee in a Huffington Post article.

plez sez: from reading sotomayor's background, it appears that she is an accomplished jurist with a background that will allow her to empathize with "the people." she was raised in ruff-and-tumble bronx, yet made it out of her environment to attend princeton and yale.

as a "moderate liberal" she is a perfect replacement for the moderate david souter.

if there is any unease with this selection in plezWorld, it is Obama's over-reliance on the ivy league connection for so many of his appointments. but if that's the way of the world, i guess i better work alittle harder on making sure the SugarPlum gets into an ivy league school!

Read the New York Times article about Obama's nominee for the Supreme Court.

Read the CNN.com article about US Circuit Court Judge and Obama Nominee to the Supreme Court Sonia Sotomayor.

This year, SugarPlum has been learning piano via the Suzuki Method, whose principles are not very different from those of the Montessori school she attends: an immersion in playing the instrument naturally at a pace set by the student. My daughter has blossomed with this method with more emphasis on playing melodies rather than with learning to play by reading notes.

My little virtuoso was given her recital piece over eight weeks ago and she mastered it in alittle over three weeks, for the past month she's been playing it while concentrating on various nuances (speed, volume, etc.). Yesterday was the piano recital for all the kids who take piano class at her school. I decided to conduct a "dress" rehearsal prior to leaving for the show.

plez sez: SugarPlum does not have stage fright and actually thrives in front of a live audience. she played her piece even better at the actual recital!

she's going to be checking plezWorld on a daily basis for updates, so please leave comments!

The story from CNN.com: 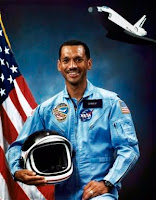 He is Charles Bolden, a retired Marine general who had been selected in 1980 as an astronaut, flying two space shuttle missions as pilot and two missions as commander.

After the Challenger accident in 1986, Gen. Bolden had been named the chief of the safety division at the Johnson Space Center "with responsibilities for overseeing the safety efforts in the return-to-flight efforts," the White House said.

Obama also announced plans to nominate Lori Garver, as deputy administrator of NASA. She was lead civil space policy adviser for Obama and helped lead the Agency Review Team for NASA during the presidential transition.

She has served as NASA's associate administrator of the Office of Policy and Plans and primary NASA spokeswoman.

"These talented individuals will help put NASA on course to boldly push the boundaries of science, aeronautics and exploration in the 21st century and ensure the long-term vibrancy of America's space program," Obama said in a
statement released by the White House.

plez sez: i was a co-operative education student with NASA (at Langley Research Center in Hampton, Virginia) when i was in college. i had some aspirations to join the space program until i realized that none of the astronauts who i met were even close to six feet tall (and i am 6'4")!

i had the pleasure of meeting General Bolden in the early 80's, as a number of jet pilots and astronauts frequented Langley Research Center and Langley Air Force Base to test aircraft. i do recall meeting two of the recently selected Black astronauts (Bluford and Bolden) during my time there. those guys (all of the astronauts) were super sharp, so i have no doubt that NASA is in good hands.

~ ~ ~
plezWorld is still kind of puzzled as to WHY CNN.com had to highlight the fact that Gen. Bolden was a Black astronaut in their article? if the media is watching... it is definitely time to move on from "racial profiling" of figures in the news. it added NOTHING to the story!

Read the AJC.com article about Gen. Bolden selected by Obama to head NASA. 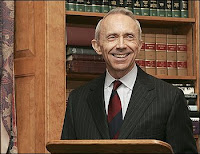 All of the major news organizations are reporting the Supreme Court Justice David Souter - appointed by George H. W. Bush - has decided to step down the end of this current term, which ends in June. President Barack Obama will get to appoint his replacement.

Souter will leave after the current court term recesses in June, the source said.

Filling Souter's seat would be President Barack Obama's first Supreme Court appointment -- and the first since George W. Bush's picks of Samuel Alito in 2006 and Chief Justice John Roberts in 2005.

Souter, 69, was tapped for the court by President George H.W. Bush in 1990, but disappointed many conservatives when he turned out to be a typical old-fashioned Yankee Republican -- a moderate, with an independent, even quirky streak.

Souter's departure will leave the two oldest justices -- and the most liberal -- still on the bench. Retirements for John Paul Stevens, 89, and Ruth Bader Ginsburg, 76, have been rumored for years, with many expecting that one or the other would be the first to give a new Democratic president a Supreme Court vacancy.

Souter's decision came as something of a surprise, although he has long been known to prefer the quiet of his New Hampshire farmhouse to the bustle of the nation's capital.

plez sez: the two oldest justices - john paul stevens and ruth bader ginsburg - are still hanging in there, but it will only be a matter of time before Obama will be tasked with replacing them (ginsburg returned to the bench this year after a bout with cancer). all told, Obama's appointments to SCOTUS will probably be the lasting legacy of his presidency. he will appoint at least three justices to the nine person bench.

SCOTUS appointments last far longer than the presidency, since they are appointed for life. and a relatively young justice, like clarence thomas when he was appointed, can remain on the bench for 30 to 40 years!

i can see Obama calling someone like bill clinton to bench, or reaching into the federal bench to find a hispanic or asian american to fill the open seat. your thoughts?

~ ~ Citations ~ ~
Read the MyDD.com article about whether Souter plans to retire.

Read the AJC.com article about Souter's plans to retire in June.

Read the Washington Post article about Souter's plans to retire.

Read the CNN.com article about Justice Souter plans to retire.