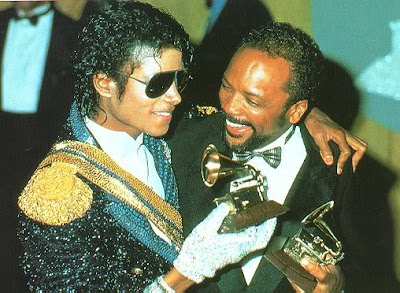 The following Q&A was featured in men.style.com shortly after the death of Michael Jackson:

Q: How have you been holding up since Michael Jackson's death?
A: Oh, man. It's surrealistic. I went to Shanghai for the movie festival over there—I took Halle Berry—and then went back to Luxembourg, and in three days I lost Ed McMahon, Farrah Fawcett, and Michael. And Michael's thing is still surrealistic to me. I can't process it, man. I don't know how to process it. It's just unbelievable—him leaving before me. I can't believe it.

Q: How did you learn that he had died?
A: Well, everybody in the world called me. I got 500 e-mails. I've never seen anything like it in my life. At first they said they'd taken him to the hospital, then they said he'd had a stroke or a heart attack—it just kept going back and forth and we didn't know what was really happening. And at first I thought he was just kind of freaked out by the coming concerts, because I was in London when they announced the 50 concerts and they sold out in four hours. . . We'd see each other all the time, and I just can't believe he's not here.

Q: You were there to witness the strange evolution in Michael's appearance. Did you ever step in and saying anything about it?
A: Oh, we talked about it all the time. But he'd come up with, "Man, I promise you I have this disease," and so forth, and "I have a blister on my lungs," and all that kind of b.s. It's hard, because Michael's a Virgo, man—he's very set in his ways. You can't talk him out of it. Chemical peels and all that stuff.

Q: Did you believe him about the disease?
A: I don't believe in any of that bullshit, no. No. Never. I've been around junkies and stuff all my life. I've heard every excuse. It's like smokers—"I only smoke when I drink" and all that stuff. But it's bullshit. You're justifying something that's destructive to your existence. It's crazy. I mean, I came up with Ray Charles, man. You know, nobody gonna pull no wool over my eyes. He did heroin 20 years! Come on. And black coffee and gin for 40 years. But when he called me to come over to see him when he was in the hospital on his way out, man, he had emphysema, hepatitis C, cirrhosis of the liver, and five malignant tumors. Please, man! I've been around this all my life. So it's hard for somebody to pull the wool over my eyes. But when somebody's hell-bent on it, you can't stop 'em.

Q: But it must've been so disturbing to see Michael's face turn into what it turned into.
A: It's ridiculous, man! Chemical peels and all of it. And I don't understand it. But he obviously didn't want to be black.

Q: But he was beautiful before?
A: Man, he was the most gorgeous guy.

Q: But he seemed to have some deep-seated issue with how he looked?
A: Well, that comes about a certain way. I'm not sure how it happens. I'm just a musician and a record producer. I'm not a psychiatrist. I don't understand all that stuff. We all got problems. But there's a great book out called Too Soon Old, Too Late Smart. Did you see that? That book says the statute of limitations has expired on all childhood traumas. Get your stuff together and get on with your life, man. Stop whinin' about what's wrong, because everybody's had a rough time, in one way or another.

Q: I've heard you say that you wanted Michael to sing "She's Out of My Life," the great pop ballad from Off the Wall, in part because you felt like he had to deal with reality.
A: I just wanted to hear him deal with a romantic relationship with a human being rather than a rat. I'm saying that facetiously, but it's true. I saw him at the Oscars very emotional about "Ben." I wanted to hear him get in touch with a real human relationship. "She's Out of My Life" was written by Tommy Bahler from a very bad ending to a marriage. So it was very real. I was saving it for Sinatra. But I gave it to Michael. And Michael cried during every take, and I left the tears in.

Q: It's interesting you mention this, because I was just watching a clip on YouTube where you're sitting on a couch with Michael and he's petting a snake the whole time.
A: Oh, I remember that. Yeah, that was Muscles.

Q: Muscles?
A: Muscles. That's a big boa constrictor he had. Muscles used to wrap around my leg in a record session and crawl across the console. I was never comfortable with that. It was a choice between that and Bubbles—you know, the chimp.

Q: Did you ever meet Bubbles?
A: Are you kidding me? He bit a hole in my daughter's hand! Rashida's hand. Rashida Jones—did you see I Love You, Man? That's my daughter. She was a little girl. And Bubbles bit her hand. Michael used to bring Muscles and Bubbles by the house all the time, you know.

Q: What did you think of that? Wasn't that a little weird?
A: I don't know, man. Everybody does his own thing. I've met every freak in the business. Everybody has their idiosyncrasies. I try not to judge it, you know. I know all women are junkies for little dogs and bags and purses. Ha ha ha ha!

Q: At root, what do you think killed Michael Jackson?
A: I don't know, man. I'm a musician. I'm not a psychiatrist. I would think that the pressure of the concerts and the debt and everything else . . . look, I've been in the hands of Nobel doctors for the last five years, in Stockholm, at the Karolinska hospital, which you can't even pay to get in. I've learned so much about the human mind and the body, and the doctors talk all the time about how you become your thoughts. It's true. With one thought it starts, you know, and if you sit there and just stay hung up on one negative thought, you will become that thought. I know that Lisa Marie Presley said that she always thought he was going to die like Elvis. You sit and think about that stuff, it'll happen to you. If you start thinking about darkness instead of light, or fear instead of love, you'll get in trouble. I really believe that.

Q: With so many people asking you about Michael Jackson, is it hard to find the private space in which to mourn his death?
A: Yes, it is. It's surrealistic. I don't know how to process it at all. Because everybody's reacting to it, and making up their own answers.

Q: You've said that you don't attend funerals anymore because you've lost so many friends. Do you plan to attend Michael Jackson's funeral?
A: No, not at all, not at all. Because it's going to be, like, 9 million people there, and it's not what I want to see.

Q: You're not going to be there?
A: No. I can't be there, anyway. I'm going to Wales the day after tomorrow, I go to Montreux, I go to Marbella, I go to the south of France. My condolences and love I've already sent to the family. But being there with 10 million people is not my idea of a tribute to somebody you were so close to—who's got a part of your soul. Our souls were joined, you know. And a piece of it goes with him.

plez sez: Q drops the bomb... but then again, is anyone surprised?!? MJ was the KING OF POP, but he was a fatally flawed individual none-the-less: the incessant whining about a childhood lost over 40 years ago, the obvious self-hatred and desire to be anything but Black, the weird social habits, the severe drug addiction, and his desire to rekindle a childhood long past with other peoples' children.

plezWorld hated to see him go, but the sad truth is that he had peaked a long time ago in a land far, far away (his record sales fell off with the allegations of child molestation soon after "Dangerous" dropped in 1992). it's been almost 20 years since he'd had a major hit album of the magnitude of "Thriller" and "Bad." he was a tortured soul... i only pray that he is finally at peace.

Plez, thanks so much for posting that interview. I'd heard Q allude to some of these things in a televised interview. It's refreshing to hear someone who was close to Mike say something other than he was a great entertainer, etc.

I was a big fan of both Michael and the J5. Had all of the records and hung the posters on my walls, when I was a kid. I'm still stunned and saddened by his death, but in truth, the Mike I listened to and loved as a kid was MIA long before that last breath left his body.