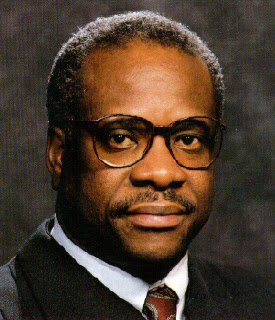 I stumbled upon a National Review article, by John A. Foster-Bey from a few years ago which gave me a different perspective from the mainstream Black liberal view of Supreme Court Justice Clarence Thomas. We know that he is Yale Law graduate and spent close to a decade heading up the U.S. Equal Employment Opportunity Commission before becoming a judge. There have only been two Black men who have ascended to the highest court in the land, and both of them viewed the use of the federal government in starkly contrasting ways. Justice Marshall followed an unabashed liberal agenda on the bench and was one of the lawyers who argued before the Supreme Court for the Brown vs. Board of Education decision in 1954. Justice Thomas follows an unabashed conservative agenda on the bench and is a staunch opponent to affirmative action.

In the article, Foster-Bey writes:

The question that this raises is: Are the efforts to vilify Justice Thomas really in the best interests of the black community — or the nation as a whole? Because he is a Supreme Court justice, Clarence Thomas is arguably one of the most, if not the most powerful blacks in the country. In addition, he represents the cutting edge of an emerging debate between the traditional black liberal leadership (and its white liberal allies) and a new black conservative alternative about how best to address the future development of the African-American community. If discourse and debate is central to a healthy, well-functioning democracy, there should be a least some concern that the political development of the black community is being limited by the attempts of many black liberals to silence black conservatives, such as Justice Thomas, with name-calling ("Uncle Tom") and marginalizing.

Another excerpt from the article states:

The passage of the 1964 Civil Rights Act brought the longstanding debate in the black community between self-reliance versus reliance on government effectively to an end — at least among the African-American leadership class. The debate was embodied in the early-20th-century positions of Booker T. Washington — who argued for self-reliance and internal development — and W. E. B. Dubois — who argued for massive political and systemic change. With the enactment of the new law, advancement for the African-American community was henceforth primarily tied to increasing the federal government's role in promoting opportunity for blacks. This meant not only reducing and eliminating illegal forms of discrimination, but also finding ways to make up for past injustices. While in the past African Americans argued that eliminating barriers and unfair, unjust, and illegal constraints were all that was needed, the new orthodoxy argued that the black community needed a progressive, activist government committed to promoting the rights of African Americans and redressing the wrongs of the past. Thus was the foundation for affirmative action and a variety of other race-based programs born.

plez sez: It seemed like only yesterday that I watched with rapt attention as Clarence Thomas withstood his "high tech lynching" on the way to becoming only the second Black person to occupy a seat on the U.S. Supreme Court. Having never heard of him and never having seen a confirmation hearing for a Supreme Court justice, the melodrama that played out with Anita Hill and pubic hairs on a Pepsi can was quite interesting. I admit that I was a bit torn as I read and researched for this post, as I am a beneficiary of the Civil Rights Movement of the 1960's and affirmative action programs of the 1970's. I can't say that I'd be where I am without those vehicles of government intervention and their redress of wholesale past wrongs done to Black people. I feel strongly that the Movement was instrumental in creating a viable and sizeable Black Middle Class. The affirmative action movement has turned the corner on 30 years and has me questioning its effectiveness today.

I find a few issues with many affirmative action programs (and any program that includes government intervention). I have an issue with accountability: there is no such thing as a free lunch, you should have to pay something to receive something, and to my way of thinking, ancestry (skin color, religion, etc.) isn't enough. Without putting "skin in the game," one will not appreciate their rewards. You will readily throw away something that you got for free before you part with something that you worked your behind off for!

Another issue that I have is the lack of measurable results from these "solutions." Do you set goals (or quotas) to measure success? Is there a timetable for when these goals should be met? Do we know that children who are bussed from the inner city to the suburbs have better grades than the one who do not? When dealing with human capital, it is usually very difficult to measure the success or failure of a program. Social engineering is a tricky business wrought with unintended consequences. When enacted, a program should have measurable goals within a specific time frame, without these things in place; any affirmative action program will more than likely be viewed as a failure.

As the chair of the Equal Employment Opportunity Commission, there is no doubt that Clarence Thomas saw more failure than success with affirmative action programs, thus coloring his judgment as to the effectiveness of these programs. I would like to see programs that prepare more Blacks for inclusion and opportunity (training programs, low interest loans, etc.), rather than programs that seek redress for past discrimination. It is possible that by tearing down the traditional 40 year old Civil Rights paradigm, we (as Black folk) may be able to move forward in a more inclusive and less divisive manner.

He may be right (and only time will tell if he is wrong), but I have to give kudos to Justice Thomas for giving it a shot!
Posted by plez... at 6:15 PM