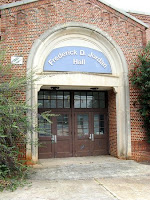 Morris Brown College is in downtown Atlanta. This once proud historically black college (HBCU) was founded in 1881 - one of only handful of HBCU's to have been founded by former slaves.

The luster of this small college has continued to be diminished over the years after it lost its accreditation by Southern Association of Colleges and Schools (SACS) for shoddy bookkeeping and a shortage of professors with advanced degrees in December 2002. With the loss of accreditation, the students of the school lost the opportunity to receive any federal or state financial aid.

For the past six and a half years, Morris Brown has been scraping and scratching for survival with few students, a handful of dedicated faculty, and a big lack of money to sustain itself and its most basic needs (the water to the campus was shut off by the city of Atlanta for a bill that exceeded $350,000).

On Tuesday afternoon, what is undoubtedly the final salvo of Morris Brown College was hurled over the bow into the trash heap of history with the auction of one of its classroom buildings on the steps of the Fulton County Courthouse steps for $900,000.

What follows are excerpts from the AJC.com about the sale of Jordan Hall:

Investors, who financed a $13.1 million construction loan for the building in 1996, bought Jordan Hall for a fraction of that sum Tuesday at a foreclosure sale on the steps of the Fulton County Courthouse. The building sold for $900,000.

What will happen to the property is unclear. Lawyers present at the foreclosure sale refused to comment. Repeated telephone calls to attorneys for the U.S. Bank Association, which represents the investors, were not returned.

“This is certainly not a great day for the Morris Brown family and the Atlanta community,” college board of trustees vice chairman Sonny Walker said Tuesday in a prepared statement. “However, the glass is not empty.”

The loss of Jordan Hall is likely to have little, if any, impact on day-to-day campus life, administration officials said. The college now has about 200 students enrolled, college officials said Tuesday.

“The students are in class and Morris Brown College is open for business,” Stanley Pritchett, acting president of the college, said in a prepared statement. “We are making strides toward securing interim funding which will enable us to relieve the strain of weekly financial crises … but the need for large donations is critical â€“ especially from the Atlanta community.”

Jordan Hall, once home to the school’s Hotel, Restaurant and Tourism Administration program, is locked. Furniture and equipment is stacked inside several entrances to the building. The Ruth Hall Hodges Art Gallery, which had space in Jordan Hall, is padlocked.

Despite the sale, Morris Brown continues to owe $12.2 million for the defaulted construction loan.

Morris Brown’s financial problems go beyond that debt. The college recently averted closing its doors when Atlanta extended a Feb. 17 deadline for Morris Brown to pay $214,000 in overdue water bills.

when the SACS revoked morris brown's accreditation in 2002, that was the last gasp of a sick college on life support. its reputation long since in tatters, the pride of a once proud HBCU couldn't muster the energy of one last lap around the atlanta university center... its brothers and sisters at morehouse, spelman, and clark atlanta university drove past the wreck that was morris brown college as if its demise was preordained.

plezWorld knows a number of graduates of the "other" schools in the AUC; they play lip service and sob crocodile tears over the demise of morris brown college, yet still snicker among themselves that they knew this day would come, and welcome the removal of the faded purple banners and its subpar students. over the years, i've heard the derisive statements about the caliber of students who attended "mo' brown high school"!
~ ~ ~
before turning your nose up at morris brown, the rest of the auc is also in a bit of pinch. just a few weeks ago, clark atlanta cut 70 full-time faculty and 30 full-time staffers. it combined some courses and cancelled all pe classes for the remainder of the semester. the cost to attend clark atlanta, including food, housing and tuition, is about $25,000. about 90 percent of its students receive financial aid.

and morehouse laid off about one-third of its part-time instructors... tough times can be found all over the auc. not quite as bad as over at mo' brown, but tough never-the-less.

~ ~ ~
morris brown college was the first HBCU founded by black people... it got a noble start in 1881. at one time, this proud school stood shoulder to shoulder with the member schools in the AUC. time, decay, neglect, and misappropriation of federal funds slowly sucked the life from the school. plezWorld arrived in the ATL in the early '80's to attend georgia tech; morris brown was already on the decline. it was the joke of the auc when i showed up in atlanta.

enrollment in 2008 is struggling to stay above three digits - i sat in undergraduate classes with more students than the entire enrollment of morris brown. i don't know anyone with a college age student who would send their child there. the water to the campus was temporarily shut off in december 2008 (the school is still over $200,000 in arrears on its water bill). a handful of supporters have taken to collecting money from motorists who pass the campus in a vain attempt to save the school. every month or so, i get an e-mail message with an appeal to contribute money to the lost cause that is mo' brown. there are less than 10 faculty at the school. a degree from the school isn't worth much more than the paper it's written on. i'm afraid that the auctioning off of jordan hall was merely a public acknowledgement that old mo' brown has finally hit rock bottom.

~ ~ ~
i propose a re-purposing of the school. for the past 20 years, it has been an unmitigated failure as an institution of higher learning, maybe it would fare better as a prep school or a boarding school for at-risk youth? make it an attractive alternative school that prepares young black boys to attend college. it has been little more than a glorified high school of late, it may as well seal the deal and make it official.

there are billions of dollars in the Obama Stimulus Package for education. maybe morris brown could re-purpose itself to be a trade school for those who want to become certified for work in the new green economy? the school has classrooms, dormitories, and a cafeteria... the only thing it's missing are new students. this is a new day and morris brown needs to move away from the faded 19th century HBCU model to a purpose that is more relevant to the 21st century.

plezWorld welcomes your thoughts and opinions...

~ ~ Citations ~ ~
Read the AJC.com article about Jordan Hall being auctioned off.

Read the AJC.com article about cuts at Morehouse.