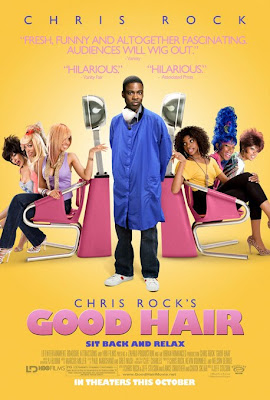 When Chris Rock’s daughter, Lola, came up to him crying and asked, “Daddy, how come I don’t have good hair?” the bewildered comic committed himself to search the ends of the earth and the depths of black culture to find out who had put that question into his little girl's head! Director Jeff Stilson’s camera followed the funnyman, and the result is Good Hair, a wonderfully insightful and entertaining, yet remarkably serious, documentary about African American hair culture.An exposé of comic proportions that only Chris Rock could pull off, Good Hair visits hair salons and styling battles, scientific laboratories, and Indian temples to explore the way black hairstyles impact the activities, pocketbooks, sexual relationships, and self-esteem of black people. Celebrities such as Ice-T, Kerry Washington, Nia Long, Paul Mooney, Raven Symoné, Maya Angelou, and Reverend Al Sharpton all candidly offer their stories and observations to Rock while he struggles with the task of figuring out how to respond to his daughter’s question. What he discovers is that black hair is a big business that doesn’t always benefit the black community and little Lola’s question might well be bigger than his ability to convince her that the stuff on top of her head is nowhere near as important as what is inside.

plez sez: saturday was my wife's birthday, so it was only fitting that we went to see chris rock's movie "Good Hair" which opened on friday here in the atlanta area. you see my wife is a Black woman and chris rock's movie is about the Black women and their hair; we've been married for close to 20 years and the only constant over all those years is the on-going saga of the care of my wife's hair. the other reason why we had to go to see this movie on its opening weekend is that one of the featured stylists - jason griggers, the white guy who should've won the bronner brothers hair show battle royale - has been my wife's hair stylist for close to ten years! jason autographed a "good hair" movie poster for my daughter, who is the same age as his son.

so despite my obvious bias going in, plezWorld found this movie to be quite enjoyable! it is a hilarious, yet sobering account of the how the care of Black hair is such a big business - it is a multi-billion dollar industry that has been wrestled away from the control of the Black community. More than 60% of all hair care products are consumed by Black people who come in at 12% of the US population. The sobering part of the equation is that control of the industry is in the hands of large white cosmetics companies (like Revlon and Clairol) and asian hair care products companies who will not do business with Black-owned retailers.

and throughout the movie was this sad undercurrent of "self hate" in the Black community as it relates to our hair: this longing to have long straight hair like white women, the perception that white people will not do business with someone who projects an afrocentric image (nappy hair or dreads or braids), this multi-billion dollar craving for products to make our hair more like our white counterparts, and this near insatiable need to even purchase hair from other ethnicities (i.e., people from eastern asia and india) and sew onto the top of our own hair to cover what we were born with.

my daughter's hair is not permed (yet!), but my wife has already had to deal with the "my hair is ugly because it is not long and doesn't swing like the little white girls in my school" issue. i vividly remember my mother putting a hot comb over an open flame on the stove in preparation for straightening my sister's hair when she was a little girl (my sister who is now a grown woman wears her hair in a natural state with long twists).

so even though there were plenty of laughs in the movie, there were some portions of the film that nearly brought tears to my eyes... how can we HATE our brown skin and our gorgeous curly locks so much? is being a Black person that bad (michael jackson bleached his skin white, for Christ's sake)? does having nappy hair equal being unworthy of being a productive citizen in the united states? my daughter is beautiful (inside and outside), but why does society continue to tell her at every turn that she is more beautiful with her hair in an unnatural straightened state?

note: by the way, my daughter normally wears her hair in braids, as it is much easier to care for by her busy working mother. but it was straightened (by another stylist who works in jason's shop) earlier this week because it was time for her annual school pictures... and we couldn't have an image of her youth saved for prosperity with curly hair in its natural state!

It is free at youtube. 6 parts including an update from London, England.

It explores the Korean Take-over of the Black Beauty Supply and Hair biz..

The current situation makes it hard to believe that Madame C.J. Walker once ran the whole thing.

I am not a hater, I am a motivator.

Plus I am a White guy who stumbled upon this, and felt it was so wrong I had to make a film about it.

self-funded film, made from the heart.

Can it be taken back?

Sometimes I think it is not about staight vs. nappy, I think it is short versus long. Never got the concept of extension braids or weave in locks.

For me that has mongrel hair the wish has been that Persis Khambatta or Alek Wek bald appeal would have influenced style.