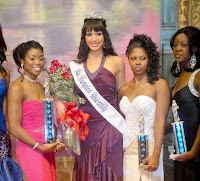 Is it me, or does it seem like a fair portion of this homecoming court is not happy?

As my business partner would say, "Whoa, Nelly!" And plezWorld has exclaimed, "What the...!" when the situation warrants... well this is one such situation.

Hampton University, the alma mater of my oldest brother, has taken to a peculiar way of finding the winner of their homecoming queen, Miss HU, she is selected by a panel of judges. It appears that they don't the title to be a mere popularity contest (and judging from the article that follows, the winner participates in the Miss Virginia pageant, so that may play into how they pick the winner, as well).

Well, this year's winner attends a satellite campus of Hampton University in Virginia Beach... and she's not Black! GASP! You see, Hampton University used to be Hampton Institute, a historically Black university (HBCU) that was founded in 1868 for Blacks who had recently been freed from slavery. When the winner of the contest was announced, some people expressed their displeasure by walking out... and I'm sure there were some unsavory comments made as well.

To make matters worse, Nikole Churchill - Miss HU - wrote a letter to a fellow Hawaiian, President Obama, urging him to intervene on her behalf and help the student body learn to embrace diversity at her college. Well, after the letter was sent, she re-thought that approach and apologized to the school... you can't make this stuff up!

The entire Daily Press article about the controversy:

HAMPTON — Miss HU apologized one day after writing a letter to President Barack Obama that said her crowning was not widely accepted on the Hampton University campus because she is not black.

Nikole Churchill, 22, is a student from Hawaii who won the pageant Friday. On Sunday, she asked Obama to help her convince close-minded people on campus to support her title.

She issued a statement about 9 p.m. Monday that said she regrets writing the president and did not intend to bring negative attention to her school.

"I took the comments of a few and blew it out of proportion," Churchill wrote. "In reality, all comments that have been directed toward me and the reception I received at the (HU vs. Howard University football game on Saturday) were genuinely supportive."

Churchill competed against nine other contestants, who were all black, and was selected by a panel of five judges, including two certified by the Miss Virginia pageant, in which Churchill will compete next.

Her crowning was followed by complaints from some students that aside from not being black, she attends the university's 90-student satellite campus in Virginia Beach and doesn't know what real HU life is like.

About 110 people attended the meeting, including business management senior Brandon Northington, who is in the student leadership program. He said Churchill, who transferred to HU from Virginia Commonwealth University, was genuinely apologetic.

Northington said she explained that as a newer student, she wasn't familiar with HU protocol and didn't initially realize she overstepped her boundaries by taking her complaint directly to Obama.

"I thought she should have contacted the student government president or even (HU President) Dr. (William) Harvey, not the president of the United States of America," he said. "If there's a problem in the house, a family problem, you keep it in the house. You don't display your dirty laundry for everyone to see."

Student Government Association President Matthew Washington said her approach made HU students seem intolerant, while they really are not. Churchill would easily have found the support she needed to feel more welcome if she contacted him or Harvey, Washington said.

"The feelings of 50 or 70 students don't reflect 5,700 students," he said. "I went to the pageant myself, and she did an excellent job. There may be some students unhappy about it, but she rightfully won her title."

Milligan said Churchill was not granting interviews to the media Tuesday.

Her win came just one week after HU held its 10th annual Mr. Pirate pageant, which is named after the school's mascot. The winner was Jonathan Lee, an accounting senior who is a third black, a third white and a third Asian, said Northington, who is his roommate.

Lee was also selected by a panel of judges.

Northington said Lee's race was not an issue when he won, and that his title was met with complete support because Lee is well-known on campus. He is a member of the Phi Beta Sigma fraternity and on the student leadership council.

The controversy following Churchill's win could have been avoided if she'd reached out to students instead of writing Obama, said Regina Powell, a 1975 HU graduate.

"I'm tired of people saying or doing things and then you come back to apologize," she said. "Think before you act. Barack cannot save everyone. The way she's going to get the students to accept her is to reach out to them."

Washington said Churchill pledged Monday to visit the Hampton campus as often as possible, including at community service and social events where she can connect with students.

hampton university has been around all of 140 years! isn't it about time the school (and its students) embrace this diversity? shouldn't they be happy that a non-traditional student be embraced?

i was a student at georgia tech in the early 80's when its first Black homecoming queen was selected... back then, the student body voted on the winner. and i remember racist comments being made about her. but only two years ago, georgia tech picked another Black homecoming queen... and it wasn't a big deal. the crowd cheered as she was driven around the stadium in the ramblin' wreck.

now, i have to be honest, plezWorld isn't a big fan of hbcu's. not because i feel they are bad schools (because hampton university happens to be a very good college), but because i feel they have served their purpose. until the 1980's, most Black college graduates had matriculated through hbcu's. but i feel that today's college students have many more options and Black colleges and universities are doing themselves a gross disservice by clutching to the vestiges of a bygone era. has racism end? i would reply with a resounding, "HELL NO!" but i feel strongly that institutional racism has become so marginalized as to be largely ineffective.

and don't even get me started on the sexism associated with a homecoming queen contest! once again, this miss
Posted by plez... at 12:14 AM

Hey Bro,
Good Article. I'm glad that the student body is diverse. She's a non black student going to a HBCU! Cool!
I once saw a KAY pledge that was Japanese on USC's campus. Cool!

But I disagree with you about the usefulness and need of HBCU. I think that they are more needed today than ever before, most schools do not focus on the well being of Black Students who too often are neglected all the way through their primary ed.
Respectfully
Jaycee

thanks for dropping by... and i was intrigued by this story as soon as i read it... and i immediately thought of the young lady who was the first Black homecoming queen at my college... and how she must've felt when there was this big to-do about her being the first Black homecoming queen at Georgia Tech. but i guess that's just part of the process and the continuum that we are on as a people.

and the fact that a non-Black woman felt comfortable enough to run for homecoming queen at an HBCU (her her ability to win) speaks to my contention that the concept of the HBCU has run its course! i am sure that the professors and administrators at HU are just as concerned about Nikole's well-being as they are about the majority of Black students at the school. to my way of thinking, the well-being and needs of a Black student are no different than those of a non-Black student, thus negating the need for a "special haven" for Black college students.

thanks again for falling thru my friend!

Accept the winner lets show them were not like them, She won fair and square.

I keep reading that HBCU's graduate a significant portion (most?) of the nation's Black doctors, and the rate of graduation of Blacks is higher at HCBU's than at white institutions.

The Irish-American mayor of my hometown back in the 1970's had graduated from Howard University, which seemed like an oddity at the time.

I like the Black traditions I've heard about at HCBU's and I'm troubled that the role and composition of the the institutions is changing. I'm not sure getting absorbed into white institutions and forgetting about Black ones is going to work for us.

But then, my majority white law school had three or four Black deans of various important departments. Brown University has a Black female president. The country has a Black president.

Maybe we have to give some to get some, and probably the country isn't going to improve without changing.

Here's question: If most people understood that "race" doesn't exist and that people are 99.9% similar genetically regardless of their skin color, would we still care that a Japanese/White girl is homecoming screen? Is it our obsession with "race" that makes "incidents" like this into "issues". Can there be "racial issues" if "race" itself doesn't exist?

I don't think there would have been as much controversy if the students had voted.

This is a very nice blog,I have seen this variety of post after a elongated moment. I value your endeavor for compiling such post.
Dissertation Editing