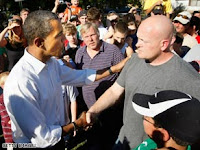 Sen. John McCain was counting on you to be the face of his economic plan... say it ain't so, Joe!

"Joe the Plumber" was the cornerstone (or latest gimmick) of Sen. John McCain's argument for his economic plan during Wednesday night's debate. "Joe the Plumber" came up over 20 times during the 90 minute debate.

Apparently, "Joe the Plumber" - his real name is Samuel Joseph Wurzelbacher of Holland, Ohio - engaged Sen. Barack Obama during a campaign stop in Ohio earlier in the week. Mr. Wurzelbacher had problems with Obama's approach because he had plans on buying the plumbing company where he worked and was afraid that Obama's tax plan would raise his taxes such that his purchase of the company would be cost prohibitive. Obama assured him that his tax plan would not raise the taxes on persons making less than $250,000 (about 95 percent of all Americans). "Joe the Plumber" was non-plussed since the business he was going to buy made $280,000 per year.

Well, it appears that "Joe the Plumber" isn't a plumber after all, since he doesn't hold a plumber's license and has NEVER had a plumber's license. As a matter of fact, Joe is nowhere near close to buying anything considering the fact that he owes the state of Ohio $1,182 in personal income taxes, according to tax records that show a lien for that amount filed against him in January 2007 and he only made $40,000 in the 2006.

Excerpts of the Toledo Blade article on "Joe the Plumber":
Since last night Mr. Wurzelbacher who lives alone with his 13-year-old son has been besieged with local and national news media, willingly granting interviews (Fox News, interviewed by CBS's Katie Couric, and ABC's "Good Morning America.").

Mr. Wurzelbacher told reporters Thursday morning that he worked for Newell Plumbing & Heating Co., a small local firm whose business addresses flow back to several residential homes, including one on Talmadge Road in Ottawa Hills.

According to Lucas County Building Inspection records, A. W. Newell Corp. does maintain a state plumbing license, and one with the City of Toledo, but would not be allowed to work in Lucas County outside of Toledo without a county license.

Mr. Wurzelbacher said he works under Al Newell’s license, but according to Ohio building regulations, he must maintain his own license to do plumbing work.

He is also not registered to operate as a plumber in Ohio, which means he’s not a plumber.

Mr. Wurzelbacher said he was hired by Mr. Newell six years ago and that the possibility of him eventually buying the company was discussed during his job interview. He said it’s his understanding he can work under Mr. Newell’s license as long as the licensed contractor works on the same site. Mr. Wurzelbacher said he is working on taking the Ohio plumbing contractors’ license test.

Mr. Wurzelbacher’s notoriety has raised the ire of Tom Joseph, business manager for Local 50 of the United Association of Plumbers, Steamfitters, and Service Mechanics, who claimed that Mr. Wurzelbacher didn’t undergo any apprenticeship training.

"When you have guys going out there with no training whatsoever, it’s a little disreputable to start with," Mr. Joseph said. "We’re the real Joe the Plumber."

Mr. Joseph said Mr. Wurzelbacher could only legally work in the townships, but not in any municipality in Lucas County or elsewhere in the country.

"This individual has got no schooling, no licenses, he’s never been to a training program, union or non-union, in the United States of America," Mr. Joseph said.

He won’t say who he will vote for on Nov. 4, but did say he likes Republican vice presidential candidate Sarah Palin.

He said he was born in the Toledo area, lived until he was 13 in the Florida Panhandle area, went to Springfield High School, and then entered the U.S. Air Force. He was stationed at an Air Force base in Alaska from 1992 until 1995. He said he was honorably discharged.

He voted in the Republican Primary in March 2008.

Excerpts of the New York Times article "Joe in the Spotlight":
Unlike some other states, Ohio does not have a formal statewide licensing system for plumbers. But the city of Toledo and other municipalities do, Mr. Joseph said, and Mr. Wurzelbacher has not met those requirements.

“All contractors are licensed, and he does not have a license, either as a contractor or a plumber,” the union official said, citing a search of government records. “I can’t find that he’s ever even applied for any kind of apprenticeship, and he has never belonged to local 189 in Columbus, which is what he claims on his Facebook page.”

According to public records, Mr. Wurzelbacher has been subject to two liens, each over $1,000, one of which — a personal tax lien — is still outstanding.

And his question to Mr. Obama about paying taxes? According to some tax analysts, if Mr. Wurzelbacher’s gross receipts from his business is $250,000 — and not his taxable income — then he would not have to pay higher taxes under Mr. Obama’s plan, and probably would be eligible for a tax cut.

Mr. Wurzelbacher is registered to vote in Lucas County under the name Samuel Joseph Worzelbacher.

“We have his named spelled W-O, instead of W-U,” Linda Howe, executive director of the Lucas County Board of Elections, said in a telephone interview. “Handwriting is sometimes hard to read. He has never corrected it in his registration card.”

The records, she said, showed he voted Republican in the March primary.

Mr. Wurzelbacher told Ms. Couric that his encounter with Mr. Obama was a matter of impulse. “Neighbors were outside asking him questions, and I didn’t think they were asking him tough enough questions,” he said.

He went on, “You know, I’ve always wanted to ask one of these guys a question and really corner them and get them to answer a question,” he said, “for once instead of tap dancing around it, and unfortunately I asked the question, but I still got a tap dance.”

He added, “Almost as good as Sammy Davis Jr.”

Read the entire CNN.com article on "Joe the Plumber" here


plez sez: damn... the press has vetted "joe the plumber" more thoroughly than mccain did palin!

i know there's only 18 days before the election, but one of these days, the mccain campaign will LEARN to do a little research before throwing names out in the public domain... they've been burnt every time: first with the governor of alaska and now with this deadbeat who is behind on his taxes!

dude ain't even a plumber!

all the news bureaus were camped outside "joe the plumber's" house this morning. i saw joe's little bungalow, the rusted out pickup truck, and the "working class" neighborhood this morning on the news. this dude is a lot closer to collecting food stamps than topping $100,000 per year! he lied to Obama when he said he was planning to buy the company he works at... but more importantly, he (and millions like him) continue to lie to themselves by voting for a republican against their own self interests... he doesn't make enough money to be a republican! Obama's tax plan would save him MORE MONEY than mccain's plan!

he is a rube and an uneducated redneck who wasted his life thinking someone like john mccain thought anymore of him than the shit that john mccain shat out of his old ass this morning. if not for millions of delusional and miserable souls like "joe the (unlicensed) plumber," the republicans would have a hard time getting five percent of the vote come election day.

well, it looks like mccain is going to have to keep searching for another gimmick for his erratic and unfocused campaign.

the mccain camp has shown the inability to properly vet people associated with the campaign. what kind of job will they do in vetting possible supreme court justices, federal judges, cabinet members, ambassadors, etc.?

once again, the prospect of a mccain presidency is scary!

I think we'll find out he was a plant, straight up.