Obama-McCain Electoral Showdown in One Day

The Sunday afternoon before the first Tuesday in November... in 2008.

Sen. Barack Obama is exhorting his supporters to get to the polls on Tuesday, "I don't win if you don't vote on Tuesday."

Sen. John McCain is exhorting his supporters to continue the "good fight," he's comeback many times before and this time will be no different (unless there's a repeat of 2000 when George W. Bush took him out in the Republican primaries).

~ ~ ~
According to just about every model that has been published, Barack Obama is nursing a substantial lead in the national polls and the key battleground states that he needs to win. FiveThirtyEight.com predicts about 332.9 electoral votes, based on their polling.

John McCain has only one option to be elected the 44th President of the United States, he must win ALL of the battleground states that were won by George W. Bush in 2004! Right now, he is trailing Obama in the following Bush 2004 states: Ohio, Virginia, North Carolina, Colorado, New Mexico, and Nevada... and Florida is a dead heat! He is slightly ahead in Indiana, Missouri, and Montana.

Early voting has Obama putting pressure on McCain to get out the vote in such crucial states as Georgia, North Carolina, Ohio, and Virginia. And remember, McCain must win ALL of the Bush 2004 states in which he is currently trailing! The only non-Bush 2004 states that are "in play" for McCain according to the pollsters are New Hampshire and Pennsylvania for a grand total of 25 electoral votes. 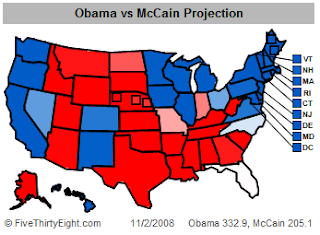 11/02/2008 Update from fivethirtyeight.com
Polls conducted since our update last evening suggest some tightening toward John McCain, but he sits well behind both nationwide and in many key battleground states and remains a long-shot to win the election.

The good news for McCain? SurveyUSA has become the latest pollster to show the race tightening in Pennsylvania, now giving Barack Obama a 7-point lead after he'd been in the mid-double digits at various points in October. The Muhlenberg/Morning Call tracker has also continued to tighten, also settling on that 7-point number.

SurveyUSA also has Virginia tightening a bit to 4 points. And McCain gained incrementally in the Research 2000, Gallup, and Diageo/Hotline trackers, although this comes after a couple of days when Obama had been moving up. (Rasmussen held steady, whereas Obama ticked up in Zogby).

Overall, our model shows McCain closing Obama's gap in the national popular vote to about 5.4 points. His win percentage has increased to 6.3 percent, from 3.8 percent last night.

However, several cautions about reading too much into these numbers:

Firstly, I have the model programmed to be EXTREMELY aggressive this time of year. There have been relatively few 'fresh' polls conducted within the past 24-48 hours -- most of these state polls were in the field late last week. As we get more data in today and tonight, the model could very well decide that the race is not tightening at all. Moreover, polling conducted on a weekend -- particularly on a quasi- holiday weekend -- is generally unreliable.

Secondly, even with this tightening, McCain remains well short the 2/2/2 condition that we defined last week:

John McCain polling within 2 points in 2 or more non-partisan polls (sorry, Strategic Vision) in at least 2 out of the 3 following states: Colorado, Virginia, Pennsylvania.
Indeed, McCain has not come within 2 points of Obama in any polls in any of these states.

Finally, where McCain has made progress, it has come mostly from undecided voters rather than Obama's support -- this is particularly the case in Pennsylvania. Therefore, he may be running out of persuadables to persuade.

In a surprise move, it appears that normally red Montana has been moved to the "tossup" category by CNN.com. 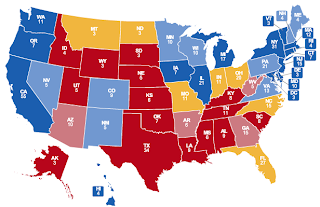 CNN.com writes of "tossup" Montana:
Call it the battle for Big Sky country.

George W. Bush won Montana by 20 points in his re-election victory four years ago. But it seems times have changed in the state.

The move is partially based on the new CNN poll of polls in Montana, compiled Friday, which suggests that McCain has a 1-point lead over his Democratic rival, Barack Obama, 46 percent to 45 percent. Nine percent of voters are undecided.

"The fact that Montana is up for grabs has to be extremely unsettling for the McCain campaign," said CNN Senior Political Researcher Alan Silverleib.

"Montana's usually a reliably Republican state in presidential campaigns. It's been won by the Democrats only twice in the past half century. If you're a Republican and you're fighting for Montana in the last few days of the campaign, you're not in good shape."

Three electoral votes are at stake in Montana, a state Obama visited in late August. McCain, the Republican nominee, has not campaigned in Montana during the general election.

With Montana moving to "tossup," CNN estimates that if the election were held today, Obama would win states with 291 electoral votes -- more than enough to capture the White House.

Read the FiveThirtyEight.com article about updated polling for 11/2/2008.

Read the CNN.com articles about Montana being in play and its final poll before the election.

Read the New York Times articles about winning what was lost in 2004 and Obama's angst about being up in the polls.

plez sez: this will easily be the most exciting election of my forty-something years! the battle is between a Black guy who could just as easily be a close friend or cousin and an elder statesman white guy who is older than ronald reagan when he won the presidency!

the dynamics of watching an American dream unfold before our eyes: a Black guy born of a Kenyan father and a mother from Kansas, born in a country before Black people could vote in some parts of the country. we've literally watched BARACK OBAMA become a statesman before our eyes, as we watched him enthrall the crowd during the 2004 Democratic National Convention to his numerous debates with Sen. Hillary Clinton to his address on race to his massive community organization effort to mobilize millions on his behalf to his staring down the elder statesman to his becoming a world figure to his being on the cusp of becoming the Leader of the Free World!

my heart races in anticipation. you have no idea the fall that i've set myself up for if OBAMA does not win on tuesday. it will be a calamitous crash of monumental proportion... one which will probably involve years of therapy for full recovery!

the polls are pointing to an OBAMA win. the stars are aligned. history is waiting for OBAMA to inscribe the next chapter of America... a new America. An America for ALL, regardless of race, class, or station.

~ ~ ~
plezWorld will be working on November 4th to ensure that everyone in my community who wants to vote, gets to vote.

i spoke to my mother a few days ago. she grew up in the segregated south (north carolina) in the 30's and 40's.

Black people weren't allowed to vote back then.

my mother and father didn't get a chance to vote until they moved our family to new york in the mid-1950's. i was born before the Civil Rights Act of 1965. i was born before it was illegal to deny Black people the right to vote. in my short life, i've seen BARACK OBAMA's story go from fantastic to realistic.

on friday, my mother and her sister took advantage of early voting in Virginia. they both voted for BARACK OBAMA!