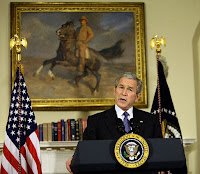 On Friday morning, President George W. Bush - yeah, the lame duck - waddled into the Roosevelt Room of the White House to announce his plans for an emergency bailout of the U.S. automakers, namely General Motors and Chrysler.

Ford Motor Company is a better financial position, so they were not included in this plan.

He intimated that under normal circumstances, he would just let the automakers file for bankruptcy, but in justification of his actions, Bush said:

These are not ordinary circumstances. In the midst of a financial crisis and a recession, allowing the U.S. auto industry to collapse is not a responsible course of action. The terms and conditions of the financing provided by the Treasury Department will facilitate restructuring of our domestic auto industry, prevent disorderly bankruptcies during a time of economic difficulty, and protect the taxpayer by ensuring that only financially viable firms receive financing. Additional loans may be available in February based on the availability of TARP funds.

Details of the plan are as follows:

Bush's announcement comes one week after Senate Republicans blocked legislation to aid the automakers that had been negotiated by the White House and Congressional Democrats, and the loan package announced by the president includes roughly the identical requirements in that bill, which had been approved by the House.

Because the bailout legislation failed in Congress, senior administration officials said that the loan package would essentially take the form of a contract between the government and the automakers. Officials said they expected those contract agreements would be signed by the end of the day.

~ ~ ~
A New York Times article about the bailout points out, under the plan, Mr. Bush essentially handed off to President-elect Barack Obama what will become one of the first, most difficult calls of his presidency: a political and economic judgment about whether G.M. and Chrysler are financially viable.

Mr. Obama and his economic team will have to make a convincing, public case that the wage cuts, plant closings and creditor agreements so change the landscape of the industry that the carmakers can turn profitable in short order.

But Mr. Obama will be under tremendous political pressure as well, because if his new team concludes that the automakers have not struck the right deals, it would mean a move to bankruptcy court, and likely widespread layoffs that would ripple far beyond the companies themselves.

Mr. Obama was elected partly with the enthusiastic support of the unions, who liked his talk of protecting jobs by renegotiating trade agreements. Now, in his first months, he will be asking them to give back gains they have negotiated over decades.

plez sez: as expected, bush squeezed the last two drops of political capital from his faded political career to provide a temporary bailout to the us automakers - his post-presidential revisionist spin team will be at the ready to re-write history to show that "the us auto industry failed under Obama's watch!"

gm and chrysler will limp into the new year with a big box of money from uncle george, with both of their plants idle until late january or mid february. and i'm not convinced that chrysler will ever open its plants under the chrysler brand in 2009.

this loan comes with few strings attached (oh, they have to sell the corporate jet that they can't afford to put back in the air. ooooh, whoopie!) and good luck with getting the UAW to offer much in the area of wage concessions, after they've fought tooth-and-nail to get the compensation and nice pension plans their workers now enjoy.

as the new york times article so deftly stated, this stinking automakers bailout turd will be sitting on BARACK OBAMA's desk when he takes over the oval office on january 20th, since george bush has essentially washed his hands of this matter by giving the automakers enough money to keep them afloat until the inauguration of Obama. bush can now go back to packing boxes for his and laura's move to dallas in a few weeks.

~ ~ ~
the federal government can't print enough money to keep the big three afloat until the end of this recession. these companies can restructure all they want, there ain't any credit available for few people who want to buy their cars! the reason for the plant shutdowns is that the inventory on hand isn't selling, so there's no need to make more cars.

okay, a show of hands: does anyone seeing this scenario of having few buyers for the glut of cars changing in the next four, eight, or twelve weeks?

one of these companies - more than likely chrysler since it is so close to brink - is going to fail.

to my way of thinking, it's better to let them fail now rather than giving away untold billions of dollars that will never be recouped. this is corporate welfare (giving away money with no foreseeable way to retrieve the assets in the future) of the highest magnitude.

Read the Atlanta Journal-Constitution article about the auto bailout.