The Moon, Venus, and Jupiter in plezWorld 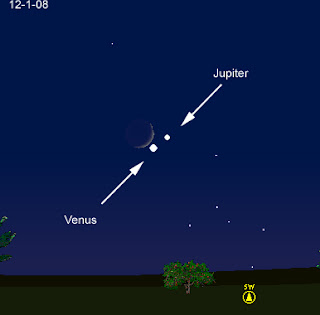 If you happened to look up in the sky (for those of us in the northern hemisphere would have to be looking towards the west) the last couple of days (since December 1st), you would've seen a rare sight (in order of brightness): the moon and the planets Venus and Jupiter.

Yes, those two bright objects that were aligned below the crescent moon were not stars, they were planets. If you missed it, you'll have to wait until 2052 to see another moon-Venus-Jupiter conjunction.

From Earthsky.org:
They’re Venus and Jupiter, and you’ll find them in a beautiful arrangement with the waxing crescent moon in the evening twilight sky. They’re the brightest lights up after the sun goes down. But remember that all three of these worlds – the moon, Venus and Jupiter – shine by reflecting the sun’s light. Here they are in their order of brightness – the waxing crescent moon- the queen planet Venus – and the king planet Jupiter.

The National Geographic article notes of the eight official planets in the solar system, five are visible at night without the aid of a telescope or binoculars. Jupiter and Venus are particularly bright, partly because both have highly reflective clouds that completely envelop them, but also because Venus is Earth's closest neighbor while Jupiter is the largest planet in the solar system. Both planets were easy to locate just after sunset in the southwestern sky.

During a conjunction, two or more of the naked-eye planets seem to be huddled close together — but this proximity is misleading. This conjunction is particularly misleading since Venus is inside the Earth's orbit and Jupiter is far outside Earth's orbit. And the moon orbits around the Earth.

plez sez: my 7-year old daughter came home from school yesterday saying that her teacher said something special was happening in the sky. we looked it up on the Internet and did some planet gazing and watching the spectacular sight. she can go to school tomorrow and say that she saw her first planets (besides Earth). it was really nice to share the moment with my family.

Read the National Geographic article about the moon, Venus, and Jupiter in the December sky.

Read the Buzz & Trends article about the astrological significance of the December conjunction.

Check out the Earthsky.org podcast about the conjunction of the moon, Venus, and Jupiter.

Read the SUNY Cortland Planetarium article about the sky show.

I was about to say..."and you know this because, why?". I'm glad to find out you aren't a total nerd (LOL), instead helping your baby girl learn. Turkey Brine, Cornbread dressing, and an intimate knowledge of our solar system. Show Off!