Normally, plezWorld reserves the Sunday spot for an open thread, but this breaking news warranted a real, live blog post... plus, i love dogs!

The New York Times got the exclusive on the Obama vegetable garden. The first dog was promised to the Washington Post. The story was supposed to break on Tuesday, but Washington is like a sieve.

Here is the Washington Post story about Bo - the Obama dog - in its entirety:

Who let the dog out?

The identity of the first puppy -- the one that the Washington press corps has been yelping about for months, the one President Obama has seemed to delight in dropping hints about -- leaked out yesterday. This despite White House efforts to delay the news until the big debut planned for Tuesday afternoon.

The little guy is a 6-month-old Portuguese water dog given to the Obama girls as a gift by that Portuguese water dog-lovin' senator himself, Edward M. Kennedy of Massachusetts. The girls named it Bo -- and let it be noted that you learned that here first. Malia and Sasha chose the name, because their cousins have a cat named Bo and because first lady Michelle Obama's father was nicknamed Diddley, a source said. (Get it? Bo . . . Diddley?)

Bo's a handsome little guy. Well suited for formal occasions at the White House, he's got tuxedo-black fur, with a white chest, white paws and a rakish white goatee.

Clearly, the identity of the dog was information too big to contain. A mysterious Web site called firstdogcharlie.com published a picture of a Portie yesterday morning, complete with a Q and A with the dog, which it said was originally named Charlie. The celebrity gossip Web site http://TMZ.com linked to the picture. So much for the big White House unveiling.

For an Obama team that ran a famously tight-knit press operation during last year's presidential election campaign, it was a sign of how tough it can be to keep a leash on information in Washington.

It's not for lack of trying, though. Bo's story starts sometime around the Ides of March. Word on the street was that the White House was going to plant a vegetable garden. Health gurus had been pushing the Obamas to plant seedlings for months, hoping it would set a good example for children everywhere.

These kinds of arrangements get made all the time in Washington. For a while, the puppy deal seemed to be holding up. Sure, reporters here and there nipped at the story. There were hints that the puppy was a gift. There were reports that the Kennedys were involved -- but the senator's press people professed no knowledge.

But then came yesterday morning. The FirstDogCharlie site included a photograph of a Portuguese water dog that looked exactly like the dog in a White House photograph -- right down to the multicolored lei. (FirstDogCharlie was registered anonymously on Friday on the Web site http://godaddy.com. Will its creators surface to take credit?)

The White House dismissed the Web site picture as "bogus." Both photos are reproduced here; you decide.

Still, there's lots of stuff that didn't leak out, including a secret get-acquainted session with the family at the White House a few weeks ago. The visit, known around the White House as "The Meeting," was a surprise for the girls. Bo wore a lei then, too.

Bo charmed the first family, a source who was there said. He sat when the girls sat, stood when the girls stood. He made no toileting errors and did not gnaw on the furniture. Bo has, after all, been receiving lessons in good behavior from the Kennedys' dog trainers. These lessons have been taking place at a secret, undisclosed location outside Washington.

Bo, though he was raised elsewhere, already has a keen sense of who's in charge inside the Beltway. When the president walked across the room during the visit, Bo followed obediently.

"He's sooooo cute," the source said, referring, let us be clear, to the puppy. "It's very exciting. They had a great meeting."

Sasha was excited; Malia focused on all the "responsibility issues"--how will Bo be trained, cared for, etc.

Just in case Portie-mania ensues -- how could it not, after all this buildup? -- a staffer warns that Porties "are not for everyone. They're very energetic. They play, play, play. Then they sleep."

They also need a lot of room to run. Fortunately, the White House has a lot of lawn.

Some issues remain to be resolved. Where, for instance, will Bo sleep? The White House has plenty of rooms to choose from, but the great question of whether he'll get to bunk with one or both of the girls remains undecided. The feeding and walking schedules are also still to be hammered out -- a "family decision," the source said.

"They're approaching this responsibly as a family," the source said.

All of this is new to the first family. Sasha and Malia have never had pets. And neither the first lady nor the president had dogs growing up.

During the campaign, word surfaced that Obama had promised a dog to his girls. Since then, he has been, ahem, hounded constantly about the choice. Precious moments in most of his first major interviews as president-elect and then as president were dedicated to the puppy question.

The Labradoodle and the Portuguese water dog -- known to its fans as a PWD -- were always in the running because they are considered good pets for children who have allergies, as Malia does.

Kennedy began lobbying for a PWD -- he has three: Sunny, Splash and Cappy. His wife, Victoria, chatted about the virtues of the rambunctious breed in frequent phone calls with Michelle Obama, the source said.

"The Kennedys and the Obamas have become great friends," the source said.

In a statement, the Kennedys said: "We couldn't be happier to see the joy that Bo is bringing to Malia and Sasha. We love our Portuguese Water Dogs and know that the girls -- and their parents -- will love theirs too."

The choice of a Portie raised one complication. The Obamas have long said they wanted a rescue dog. But the carefully bred PWDs almost never end up in shelters. Bo had been living with another family, but it wasn't a good fit, so the Kennedys acquired him for the Obamas.

As for the rescue pledge, the Obamas came up with a solution intended to lend a serious symbolic note: They're going to make a donation to the D.C. Humane Society. 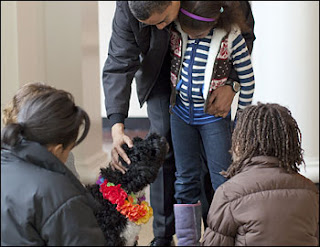 Of course, there's the intrigue that continues to surround the Obamas... is this actually the dog the Obama girls will get? The poll below is from the Washington Post story:

plez sez: growing up, i had a labrador retriever. but they shed a lot, so it probably wouldn't be a good choice of someone with allergies... but an excellent family dog.

i hope "bo" enjoys his new home and family.

~ ~ Citations ~ ~
Read the Washington Post article about the first puppy.

Read the Minneapolis StarTribune.com article about the new first dog.

Read the AJC.com article about Bo, the new first dog.