"If there’s just Roosevelt and Churchill sitting in a room with a brandy, that’s an easier negotiation. But that’s not the world we live in, and it shouldn’t be the world that we live in."
- President Barack Obama during an hourlong press conference with international news media (including reporters from India and China). After the press conference, many reporters stood and cheered the President. 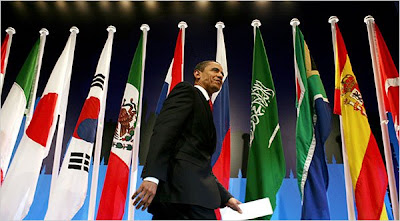 President Obama set to igniting the imagination on a global scale as he traveled to Europe to participate in the G-20 Summit in England. The trip had a number of key objectives: restore some sense of credibility in the office of the President of the United States, gain some fiscal support from other world leaders, shore up commitments to join the US in its fight against terrorism in Afghanistan, and bring the United States back to the table of world discussion.

Obama did mediate a tense disagreement between the leaders from France and China, by pulling both aside and getting them to agree on a compromise (statesmanship - check).

Great Britain did agree to assist in Afghanistan, but the panty-waists in France and Germany demurred (al Qaeda - half-check).

Most of the world agrees that we are in this bad economy together and one nation will not be able to spend us out of it. Even though, they agree, very few committed any money to the cause (recession - no check).

And Obama was greeted by crowds everywhere he went, he even held a US-style town hall meeting with several thousand in Strasbourg, France (rock star status - check).

As only he can do, President Obama captivated the town hall meeting crowd with his speech and candor during a question-and-answer period:

"In America, there's a failure to appreciate Europe's leading role in the world. Instead of celebrating your dynamic union and seeking to partner with you to meet common challenges, there have been times where America's showed arrogance and been dismissive, even derisive.

"But in Europe, there is an anti-Americanism that is at once casual but can also be insidious. Instead of recognizing the good that America so often does in the world, there have been times where Europeans choose to blame America for much of what's bad.

"On both sides of the Atlantic, these attitudes have become all too common. They are not wise; they do not represent the truth. They threaten to widen the divide across the Atlantic and leave us both more isolated.

"So let me say this as clearly as I can: America is changing. But it cannot be America alone that changes."

plez sez: America is back! we can now resume our place as the preeminent power on the world stage.

george w. bush makes President Obama seem almost mythical in stature... the contrast is so amazing. could anyone imagine bush standing before a crowd of anyone other than the staunchest of right-wing allies and holding court? never... in a million years, never!

~ ~ Citations ~ ~
Read the CNN.com article about the Presidents comments at the town hall meeting in Strasbourg, France.

Read Fareed Zakaria's CNN.com article about how Obama got it right in Europe.

Read the New York Times article about an assessment of Obama's performance in Europe.

Read the guardian.co.uk article about how British Prime Minister Brown plans to capitalize on gains made during G-20 Summit.