"The reason I think I may have met him is I know somebody told me as I was shaking his hand that he had taken pride in voting for George Bush twice."
- Sen. Barack Obama described the one time that he met the DeKalb County CEO Vernon Jones, while visiting Cobb County, Georgia yesterday.

Due to term limits, Vernon Jones will leave the CEO job at the end of the year and is currently running as a conservative Democrat for the US Senate. He has admitted to voting for President George W. Bush in 2000 and 2004. 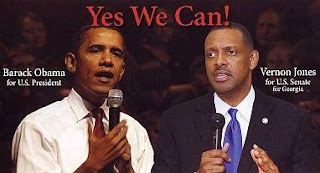 The flyer above appears to be a photo of Jones standing next to Obama in front of a campaign crowd. The photo was a digital compilation of two or more images. Jones said he wasn't trying to mislead anyone with the mailer, but his opponents accused him of implying he is being endorsed by Obama, an idea quickly dismissed by Obama's campaign.

After Obama's speech, Jones is quoted as saying, "For Sen. Obama to win Georgia, he will need conservative Democrats like myself."


plez sez: i'm not shocked! because i've met vernon jones. i am ashamed, because i know vernon jones! he obviously plans to ride BARACK OBAMA's jock to washington, but this is a sleazy way of doing it. if jones is a two-time george w. bush supporter, there's no way that he can say with a straight face that he is an Obama supporter (he didn't even come out to endorse Obama until after he had enough votes to win the nomination).

i live in dekalb county and i received one of those mailers over the weekend. it is obvious that the picture is doctored (and it isn't done very well, either). i'm afraid that i cannot support a "say anything, do anything to get elected" politician, even if he is my frat brother!

i never thought i would be writing this about vernon jones, but plezWorld hopes he doesn't get the nod as the Democratic nominee during the july 15 primary - pretty wishful thinking since most Black folk in georgia will undoubtedly vote for jones (since the other four Democratic nominees are white).

if jones is the nominee, he will drag Obama down with him in georgia in november.

i agree Plez. it's hard to vote for him even if he is frat. i checked his website out, and there is NO MENTION of his jail time or the "money issues" he faced a while back. this was no shock, but i lost a lot of respect for the guy for not being forthcoming with ALL information, both good and bad. just be honest. hearing how sleazy this guy is from the article and your blog, i am glad i didn't vote for him. i did my research and voted for on of the white candidates and just put my absentee ballot in the mail.

I support Vernon Jones as CEO of DeKalb County, but I support Dale Cardwell for Senate. Vernon did a great job of fiscal managment of DeKalb county's resources and did a good job of expanding opportunities on the south side of the county, an area too easily ignored in the past. However, I also find Jones to be too shifty and divisive to actually beat Chambliss. I think Cardwell has the name recognition to do it... Who do you endorse for CEO?

i have a good friend and former teammate (we played church league basketball together about 10 years ago) who is running for DeKalb County CEO: Stan Watson has already received my vote (i voted about 2 weeks ago)!

i know vernon jones quite well - we are members of the same fraternity and i have socialized with him on a number of occasions. i respect him as a man and my frat brother, but i do not agree with his politics. i don't think him being the Democratic nominee for the Senate will help Obama win Georgia - more than likely, his presence on the ballot will energize The Right to support Chambliss, thus causing Obama to also lose the state.