Bill Lester – What the Fuss? 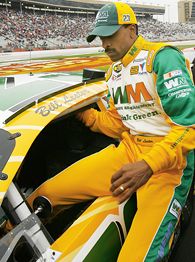 It’s been 20 years since Willy T. Ribbs was buckled into a NASCAR Series vehicle and took to the black top in a race. On Monday, Bill Lester was strapped into his green and gold Waste Management car and participated in the NASCAR Golden Corral 500. Bill Lester became the first Black person to participate in a NASCAR race since 1986. Some would say that this is a cause for celebration and jubilation in the Black community. Hmmm, barely a whisper?

Didn’t Tiger Woods’ monumental victory at the Masters in 1997 represent a high water mark in achievement’s for Blacks in non-traditional sports? Well, it did start a groundswell of interest for people who had never played golf before; I’m included in that group – I went out and bought my first set of clubs and started taking lessons a few months after Tiger’s victory. But, to date, Tiger Woods is the only African American on the PGA Tour (and it’s been close to 10 years since he broke the record for scoring at the Masters).

Well, if you thought that golf was the last bastion for exclusivity, think again. NASCAR racing which has its roots firmly embedded in white Southern tradition, Budweiser beer, tricked out RV campers, and flapping Confederate flags has got PGA Golf beat. Race cars are a lot more expensive than a set of golf clubs, the engineering that goes into the development of the engines, tires, and associated equipment, not to mention the hiring of automotive expertise runs into the tens of millions of dollars on an annual basis. The entire circuit is fueled by endorsement deals that require deep pockets and the patience for a team to develop enough of a following to make the venture profitable. That doesn’t leave the door wide open to a lot of newcomers or non-traditional participants.

This isn’t a sport for the faint of heart or those without lots of endorsement deals. Enter Bill Lester, a 45-year old Berkley engineering graduate with an infectious smile and cool demeanor. Like Tiger Woods, he appears to have the cool to make it big, but does he have the marquee value to pull it off. Tiger Woods made a big splash because he won… and he won big on golf’s biggest stage: The Masters. On Monday, Bill Lester started in the middle of the pack and finished somewhere near the back (in 38th place). To make an impact on the sport, he’ll have to be more than a bit player or do better than come near the end of the pack.

“It was a very significant learning experience for me. It was fun to be out there with them. This is just the beginning and we have two more (Nextel Cup) races to go. I got a late start in my career and I'm trying to catch up as quick as I can."

In another quote, Lester said he hopes he earned some respect from the other Cup drivers.

"I was able to bring it home in one piece and able to build up my database of knowledge. There were some opportunities for me to take some chances and I could have gotten in the way. But I'm not trying to do that."

I know the media (especially ESPN) salivates over the opportunity to be part of sports history, but I don’t think this event qualifies. I know it’s been 20 years, but Bill Lester didn’t win the race (he was 38th of the 41 cars that finished). He’ll have to go back, tweak his engine, and work on breaking into the top ten in his two remaining races. What he did was a great personal accomplishment. When he takes the checkered flag at Daytona or Talledega, then we can hail that as a historical event.
Posted by plez... at 1:43 PM

I was going to write on this but it got lost because there was (as usual) a court hearing coming up so my energies went elsewhere.

Do a google search because there was a huge special a month ago on either speedvision or ESPN sponsored by Nascar that talked about Wendell Scott and others that came before him, even.

Lots of interviews, slick production and all that.

There's a young brown brother in the pickup series, too.