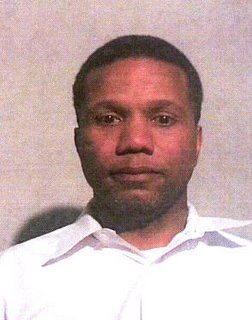 In a surprising weekend development, it was learned that a high ranking White House insider has been padding his $160,000 salary with over $5,000 worth of goods from Target and Hecht's. Yes, Claude Allen, Bush's top domestic policy advisor was nabbed after receiving 25 "refunds" for products that he didn't buy.

CNN reports: The items ranged from a Bose theater system to a photo printer to clothing to small items valued at $2.50.

The Slate reports that Mr. Allen baffled administration critics and backers when he abruptly resigned his White House post back in February 9,2006 after only one year on the job. He cited the need to spend more time with his family. He was busted by the Montgomery County Police on January 2, 2006, I guess he wanted to get in some quality time, before heading to the Big House. 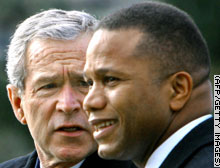 Prior to his job as President Bush's top domestic policy advisor, Mr. Allen was the Deputy Secretary of the Department of Health and Human Services. Claude Allen was known as a right-wing ultraconservative ideologue who once worked on a Jesse Helms re-election campaign, where he spewed homophobic rhetoric. He was seen as a rising star in the Republican Party and was a George Bush nominee for a circuit court judgeship that was stalled by the Democrats in Congress.

Admittedly, I didn't see much television this weekend, but I would think that someone this close to the President in this type of hot water would warrant more critism by the press (this news wasn't even a short blurb on the cover of today's USA Today and you have to do a search to find the story on CNN.com). Maybe all the whining about the Liberal press has finally gotten to them.

I won't say he got his comeuppance, because I don't wish harm on anyone. And any high ranking government official who gets caught engaging in this type of petty crime is probably more clinical than criminal. I just hope he gets some psychiatric help while he sits in jail eating his humble pie.
Posted by plez... at 2:26 PM