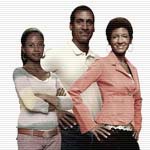 The reality show industry is now a well-oiled machine. We have game shows like "Survivor" and "Flava of Love," and in lieu of the oh so popular sitcoms, we now have riveting real-life dramas like "Wife Swap" and "Super Nanny" where a lady of England comes to the United States and whips your unruly kids into shape! Well, an interesting turn on the parent swap show is a new race swap show that debuted on last night. A writer for the Slate had an interesting commentary on last night's "Black. White." which aired on FX.

I've seen the two families on a few talk shows like Oprah, Larry King Live, and CNN. I am away from home in a hotel that doesn't receive the FX channel, so I'll have to wait until this weekend to watch it on my Dish Network DVR. From what I've seen and read about the show, I do have a perspective on it.

Unfortunately, this division between the Black and White races has been with us since before this country was founded and it is something that WE have never had the grace nor the guts to honesty discuss. We refuse to discuss the psychological and debilitating effect that being descendants of slaves has had on generations of Black people. We refuse to discuss the issue of White privilege and how many White people feel this privilege is their prerogative. We refuse to discuss the complex and deeply ingrained reasons for this country to have such a large and seemingly unmotivated Black underclass that no amount of money can eradicate. We refuse to talk about why there is a perception that Black neighborhoods are more prone to crime than their White counterparts. And we refuse to talk about why we cannot talk about these issues with one another without the discussion gravitating into baseless name-calling and accusations.

I think the show "Black. White." was supposed to be an effort to broach some of these subjects, but even as these two families went about with their race swap, the ability to honestly and openly discuss their feelings and perceptions was never realized. The Black family thinks the White family members are racially insensitive, and the White family thinks the Black family members are hypersensitive.

Fox and ABC both have these "wife swap" shows, and I think they run into the same (or similar) issues when they have the big roundup at the end of the show. The other family is always "too strict," or "too liberal," or "too conservative," or "too clean," or "too dirty." I guess it is very easy to see the mote in someone else's eye, when we can't see that big ole log in our own!

I have even had the chance to run across some other perspectives on race relations.
Right Wing Sparkle writes in her blog:

I chaperoned a dance recently where another mother was discussing how glad she
was that there weren't many blacks at the school. I said, "how can you say such
a thing?" She rolled her eyes, "I'm just being honest. With them comes drugs,
crime, and godawful music." I just walked away.

A conservative blogger from the Massachusetts is apparently nonplussed by those who choose to race bait:

Bottom line; don't look for trouble where it doesn't exist. True equality will
not be reached until both races can look at each other without having the first
thought in their heads being "He's a different race". Unfortunately, I don't see
that happening for a few generations, until all lingering vestiges of racism are
forgotten by our descendents. I mean, look how far we've come in 50 years. I am
very hopeful this won't even be an issue by the time my grandchildren are in school.

Mixed Media Watch has another perspective on the show:

The clearest message from this show is that color is only half the battle.
There's a cultural gulf between (stereo)"typical" black and white families (and
they both described themselves as typical) that the producers didn't attempt to
bridge until the show actually got started. And, as Rose so astutely put it,
they all deal in the language of stereotypes. Oh, and none of them looks great,
but Renee ain't foolin anyone.

Hopefully, this show will continue to give Americans who are Black and White the opportunity to talk about our differences, so that we can find those things that unite us and minimize those things that divide us.
Posted by plez... at 2:46 PM


And some modern takes:
http://rightwingsparkle.blogspot.com/2006/01/backtracking-on-race-should-that-be.html

Hopefully, this show will continue to give Americans who are Black and White the opportunity to talk about our differences, so that we can find those things that unite us and minimize those things that divide us.

You summed it up well. Great commentary overall too.