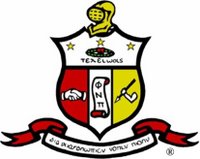 Five members of Kappa Alpha Psi Fraternity at Florida A&M University fraternity were arrested on Monday night on felony hazing charges after students pledging the fraternity said they were brutally beaten with broken canes, smacked and taunted until some passed out. The undergraduate Alpha Xi Chapter of the fraternity has been suspended from campus until 2013.

Marcus Jones, whose father reported the alleged hazing in March, was
one of as many as 26 students beaten during a series of Kappa Alpha Psi
initiation incidents from Feb. 23 to Feb. 28, according to a
probable-cause report from the Leon County Sheriff's Office. Jones, 19,
a sophomore from Decatur, Ga., had surgery March 7 for wounds to his
buttocks, which required 25 stitches and a drainage tube, according to
the report. Jones also suffered a ruptured eardrum and will not regain
100 percent hearing in his left ear, according to the report.

plez sez: This was a very difficult post for me to write because I am a member of this Fraternity and I am an advisor of an undergraduate chapter. My heart sank when I first heard of these allegations a few weeks ago. These types of incidents do not bode well for the fraternity system as a whole and Black male college students in particular. I will reserve judgement and further comment on this particular case because even those who used to live in glass houses should refrain from throwing stones!

But I will say that it is about time that fraternity members who engage in felonious assaults on other students be held legally accountable for their actions.
Posted by plez... at 7:27 PM

Aren't you sick of all the favortism that is afforded select groups? I think our legal systems needs to be revamped. I'm sure that's a big Duhhhh to everyone.

I am embarrassed for my Fraternity and I feel really bad for the young man who entrusted his well-being with a group of guys who violated that trust by beating the sh*t out of him.

I don't see where favoritism comes into play as it appears that the five perpetrators have been kicked out of school and will undoubtedly be tried under Florida's new hazing statutes. An act of stupidity has cost them their chance for a quality education from FAMU.

I wasn't actually talking about the fraternities as it pertains to favoritism. However, it does come into play when certain groups get together. They have a feeling of entitlement. As if there are no limits to what they can do. How do they get to that end favoritism. Favoritism begets entitlement.

I'm glad I never pledged. As I went through my college career I heard some of the silly things pledges were forced to do and it made me glad I'm a loner. LOL

In 99% of the situations, being a member of a fraternity while in college can be a rewarding and quite fulfilling activity. But it is also a very personal decision to pursue it and it is not a one-size-fits-all organization.

It is a shame that the 1% tends to get the press coverage (as evidenced by my decision to even write a post about it). My only reason for posting this was in the hopes that some other young man who truly wants to join such an organization will have the where with all to know that he doesn't have to submit himself to something like this to become a member.

@ plez: You are correct I guess I should have described myself as a non-conformist than a loner.

Besides I didn't have the money must less the time to pledge and be involved in frat activities.

I'm sorry to hear that your frat brothers have sullied the reputation of your oganization.
Maybe something positive can come of this tragedy.

I'm embarressed also to here about this incident. A few bad apples will spoil the bunch, but they can't destroy the whole tree. The roots or our fraternity run deep. So don't let it get you down...I'm not. Tonight I'm celebrating my 18th anniversary as a member of this prestigious fraternity, and I plan on having fun. PHI Nupe!