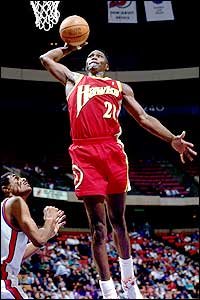 The Atlanta Journal-Constitution reports that Dominique Wilkins, the Atlanta Hawks' all-time leading scorer, the Human Highlight Film, and an icon of Georgia sports has finally been elected to the Basketball Hall of Fame . For those who don't know, Dominique Wilkins out-Jordaned Michael Jordan in the Basketball Dunking Department on a number of occasions, but he rarely had a great supporting cast (and he didn't play defense like the Great One until late in his career)!

Dominique was the third pick in the 1982 draft by the Utah Jazz and was later traded to the Atlanta Hawks. He flourished in Atlanta as a pure scorer averaging close to 25 ppg during his NBA career. Nique reached the pinnacle of his career when he went toe-to-toe with Larry Bird in an epic 1988 playoff battle with the Boston Celtics. He was also a two-time NBA Slam Dunk Contest winner.

plez sez: Being a long time resident of Atlanta, I'm pleased as punch, because Dominique Wilkins is at the top of the list of true Atlanta star athletes (on par with Hammering Hank Aaron and Michael Vick). I hate that he was snubbed by the selection committee last year and he was left off of the Original Top 50 NBA Players list.

Congrats to Dominique and to Atlanta for having him.