Georgia Tech in the News 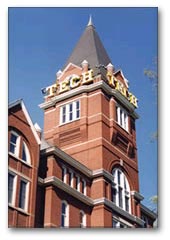 plez sez: From the article, it appears that this young man has been on the federal government's radar for quite some time (at least a year before his arrest). It looks like the "war on terror" has finally yielded a real win.

Crittenton arrival forces Fredrick's departure
It appears that with the arrival of top basketball recruit Javoris Crittenton, Zam Fredrick has decided to transfer to another school.

plez sez: These kids should be going to college for an education and a quality education is one thing that Georgia Tech offers. I am sure that Zam Fredrick is a talented young man and wants to play basketball, but he should also weigh the importance of playing college basketball while receiving a quality degree against his prospects of being able to earn a living of playing professional basketball. I've seen him play... he needs to concentrate on his degree!

Audio portions of this blog are powered by

Why news from Georgia Tech? I received my degree in electrical engineering from there and I've had football season ticket for over 15 years!
Posted by plez... at 10:34 AM

The joke......excuse me .....war on terror was bound to get somebody one of these days. What else do you expect from such a "shotgun" tactic?

As for Zam, he definitely did not play up to his hype. I hope he doesn't think that he is good enough to throw away a season to go play for someone else.