PGA US Open Playoff with Tiger 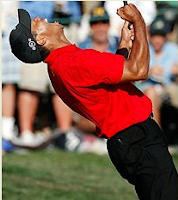 Doing what he does best, Tiger Woods took Rocco Mediate to a playoff after Sunday's action at the 108th United States Open.

Playing solid, yet unspectacular golf, throughout the fourth round on Sunday, Tiger was never more than two strokes out of the lead. His sore left knee provided the most theater during the round as Tiger grimaced his way through the eighteen holes.

Rocco Mediate - who has never won a major golf title - bounced into the clubhouse with a one stroke lead over Tiger Woods and his playing partner, Lee Westwood. Both made it to the 18th green with a long putt opportunity for a birdie that would take Mediate into a playoff.

Westwood's birdie putt fell short and he had to settle for par and second place.

Then it was Tiger's turn with a 15 foot putt.

Tiger examined the green like a surgeon looking for the proper place to make his first incision. He stood at his ball and took a few practice swings. Then addressed the ball in the total silence of the gallery. He struck the ball... it bounced along the smooth greens seemingly wanting to veer away from the hole, yet compelled and willed into the hole by the advancing footsteps of Tiger Woods.

That little white ball rolled in... and plezWorld damn near fainted!
The US Open will be decided by an eighteen hole playoff on Monday:

Phuque DVR ... I'm going to work out of my home office so that I can watch all 18-holes!

It was truly a remarkable Saturday and Sunday of Tiger Woods golf. He showed something on the 18th when he battled for that birdie...

I WISH! i have an 11am offsite meeting with my business partners, so i will endeavor to get home by 3pm to watch the entire spectacle (sans advertisements).

can he pull it off, looks like he needs another mirical as i loook now