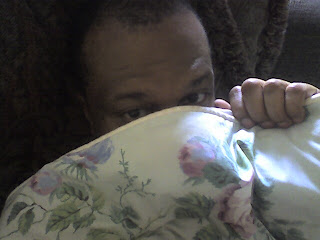 According to the rules and regulations of Blog365, today is supposed to be a Free Day: the one day of the year when Blog365 participants should NOT blog since this is a Leap Year. I'm still layed up recovering from a bout with the flu and my judgement is doubtless clouded by the fog of greenish mucous that I've been coughing out of my lungs every couple of minutes.

Since I my body has been wrecked with coughing fits and a sickly fever and muscle aches, I have quarantined myself to the big a** couch under a couple of blankets in the sitting room just off of the master bedroom. The television here is scheduled to spring to life every morning to C-SPAN's Washington Journal at seven o'clock. This morning's lead story was that one out of every 100 Americans are now in prison, for Black men, the number is more like one out of every nine in the 20 to 34 age group. The US locks up more of its citizens (by sheer number and percentage of total) than any other country - China comes in at a distant second. Of course, the open phone lines presented a vast swath of American opinion from liberal excuses to the predisposition of Blacks to criminal activity. I heard very little real analysis.

If you ask me - and I know you did - the high number of criminals in this country is tied directly to three things: (1) criminalization of drug use, (2) destruction of the family, and (3) lack of education. It each case, these three things are amplified and magnified in the Black community, thus the explosion of incarceration of Black men. Most Black men who are in jail are there for non-violent offenses (the remnants of the war on drugs), perpetrators of those crimes should fulfill an obligation to the state rather than being sent to a prison to learn a racket behind bars. I'd rather see them picking up trash along the highway, cleaning our waterways, filling potholes, or scrubbing graffiti. their crime is no worse than an alcohol offense, rather than locking them up with hardened criminals, put their idle hands to work for the betterment of our community.

The Black community has never recovered from the liberal Great Society social engineering experiment that ripped fathers from their families for the purpose of generating marginally higher checks from the state that began in the mid-1960's. A fatherless economy now flourishes in the Black community and no one wants to admit that the lack of a father figure living in the house with little boys and little girls is contributing to the destruction of the fabric of the community. Little boys do not see a man going to work every day and providing for his family, they are growing up seeing that as the work of the woman! Little girls see their mothers providing for the family without benefit of a father and they grow up thinking that this must be their role for their family. After several generations, you have Black families that do not see the need for a Black father in the household... Black men are relegated to being little more than sperm donors. To my way of thinking, if you are not working to provide for your family, there is little left for you to do other than engage in criminal activity. In some families, incarceration of the man is seen as a rite of passage!

Education. Education. Education. As a whole, there is not a great emphasis on quality education in the Black community. I see this as the greatest impediment to the advancement of Black people. It appears that there is a wholesale rejection of education as a way to increase one's station in life - in a society that rewards those who are educated and pisses on those who are not... there are very few options open to those who do not have a high school diploma. Low wage, factory work has been shipped overseas. Higher wage, high tech jobs require college degrees and many of these are being shipped overseas as well. You cannot get a job in this country without an adequate education, without an education, one has few options that does not include criminal behavior.

plez sez: i don't have the energy to wrap this up... another double-shot of Nyquil has me fading fast! i took the picture above just before just before i faded off to sleep... sweet dreams are made of this...

I remember the time when education was a priority. Be prepared when Jim Crow ends; we were and when the doors opened 1 in a 100 were hired. It took two more generations, before most could walk through the doors. In the meantime the models of making money were the athletes and the rappers. I guess our community got so tired of saying the first black to do this and that. Education had seemed to fail the poor. In some places blacks couldn't get those trade skills, I should say locked out. Some labor is preferred to be some other group than us. I am not speaking of illegal immigrants. Working class jobs are dissappearing. With the cost of education and the cut back on the ability to get loans, even for two year courses; it looks like every one with a high school education will either flipping burgers or become a sales associate, without commission. I think our community need meaningful jobs inside the community. By meaningful I mean jobs that actually produces a product, where many types of skills are required. Black people in the South have been known for their service, we were the preferred maid, butler, waiter, etc. It did not lead to a niche economy, we were replaced. I think that more than anything is why we are in the state we are now. In the past each group has succeeded in some niche industry, where they were allowed to succeed and were able to accumulate wealth. Blacks are not known as expert IT people, engineers, lawyers, financial wizards, or shop owners; our niche is athletics, music, and preaching, none of which enriches the total group.

thanks Plez. i feel honored and look forward to it.

Couldn't take a day of rest, could you?

m.j. - my wife FLIPPED OUT when she found out that i was on my "death bed" and blogging!

i was really only testing the wireless network in my house, i didn't think the signal would reach that far! *smile*